Blog related to my Google Summer of Code project at NUIGroup

Below you can find links to video tutorials for setting up CCVMultiplexer as a client and as a server.

Hope these will be useful.

We are ready to release the alpha version of CCVMultiplexer. It can be downlaoded from

This version is bundled with the existing CCV1.5
That means you can also use the CCV1.5 features if you dont want to use the multiplexer functionality.

I am considering you are well versed with using a normal CCV 1.5, so i’ll straight away point the differences.
In the zip file, you will find a “data/xml”  folder. Two new additions have been made

For a particular system, you can have only one server with multiple client nodes! and a computer can act as a server OR a client.

Identify which computers will act as nodes and which one will act as server(the server will run the multitouch application, also it has to combine all the data so choose a powerful computer)

Setting up the server:

IMPORTANT: Do not turn this on if you do not intend to use the multiplexer, as it will result in unnecessary processor usage!

We now look into server_settings.xml.
The layout:

With TCP the system works on a lower fps, but a packet will never be lost because its TCP!

IMPORTANT: For TCP, the server instance of CCV should be started before any client instance of CCV (because tcp client binds to a socket and not a port number) howere with UDP there is no such restriction

Only these parameters are required to turn CCV into a multiplexer. Each node will be like an image, so its exactly similar to CCV 1.5

Setting up the Client:

Client will start running the multiplexer node, if you turn on the toggle switch named CCVMULTIPLEXER

IMPORTANT: The system will only work when all the clients (equal to numclients in server_settings.xml) have been turned ON.

Everything else is common to the existing CCV. you chose which node image to use and in what order they are stitched.

NOTE: For this release the the console is also displayed (for debugging purpose) due to this you will get a low fps, because the application has to print all the data to the console. Future releases will not have this, resulting in a better fps for the sytem.

Any suggestions are appreciated.
Also feel free to point out the bugs.

CCVMultiplexer is my GSoC project for NUI group this year. The need for a network multiplexer arises when building a large Multi-Touch setup.
CCV 1.5 uses multicam approach to do this. With CCVMultiplexer we run multiple instances of CCV on different computers connected over a network. All the instances act as node’s and there blob data is combined by the CCVMultiplexer (the server). 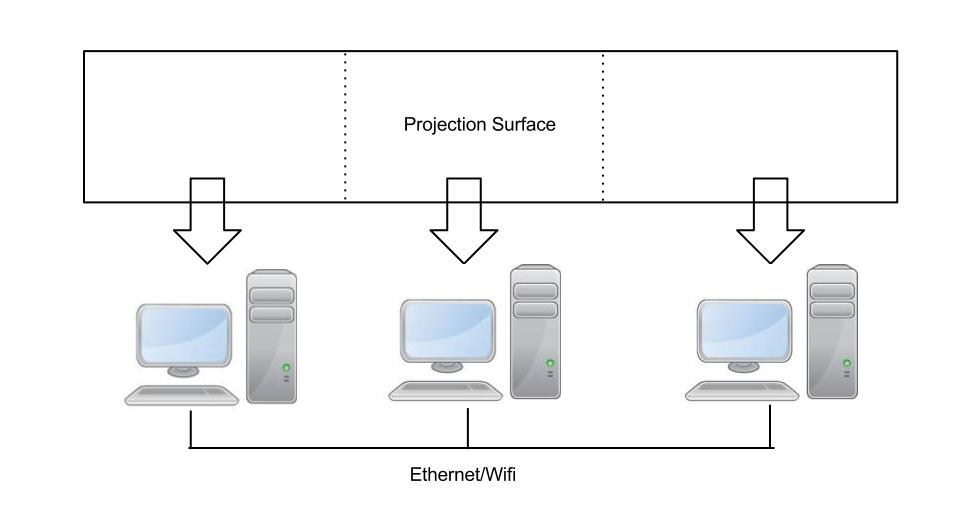 Later posts will discuss how to setup CCVMultiplexer